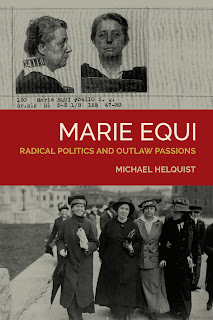 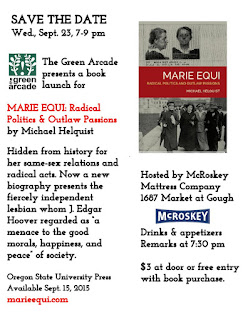 Hello again BIKE NOPA followers. In late September 2011, I filed one of my last posts here, explaining that I wanted to devote more time to completing a book I had begun a few years earlier. At long last the historical biography MARIE EQUI, Radical Politics and Outlaw Passions is finished. The printer has the manuscript, and copies will be available in September. I'm happy to have the book published by Oregon State University Press.

I hope to see you there.

For more info on my book, book blog, and other writings:  michaelhelquist.com
Stop by and give a LIKE to my Facebook page: MichaelHelquistwriter  for updates on events.

If you want to read more right now, here's the description from my publisher's current catalog:


MARIE EQUI: Radical Politics & Outlaw Passions explores the fiercely independent life of an extraordinary woman. Born of Italian-Irish parents in 1872, Equi endured childhood labor in a gritty Massachusetts textile mill before fleeing to an Oregon homestead with her first longtime woman companion, who described her as impulsive, earnest, and kind-hearted. These traits, along with courage, stubborn resolve, and a passion for justice, propelled Equi through an unparalleled life journey.

Equi self-studied her way into a San Francisco medical school and then obtained her license in Portland to become one of the first practicing woman physicians in the Pacific Northwest. From Pendleton, Portland, Seattle and beyond to Boston, New York, and San Francisco, she leveraged her professional status to fight for woman suffrage, labor rights, and reproductive freedom. She mounted soapboxes, fought with police, and spent a night in jail with birth control advocate Margaret Sanger. Equi marched so often with unemployed men that the media referred to them as her army. She battled for economic justice at every turn and protested the U.S. entry into World War I, leading to a conviction for sedition and a three-year sentence in San Quentin. Breaking boundaries in all facets of life, she became the first well-known lesbian in Oregon, and her same-sex affairs figured prominently in two cases before the Ninth Circuit Court of Appeals.

MARIE EQUI is a finely written, rigorously researched account of a woman of consequence, who one fellow-activist considered “the most interesting woman that ever lived in this state, certainly the most fascinating, colorful, and flamboyant.” This much-anticipated biography will engage  anyone  interested in Pacific Northwest history, women’s studies,  the history of lesbian and gay rights, and the personal demands of political activism. It is the inspiring story of a singular woman who was not afraid to take risks, who refused to compromise her principles in the face of enormous opposition and adversity, and who paid a steep personal price for living by her convictions.
Posted by Michael Helquist at 11:48 AM