SFMTA Sets Public Hearing for Masonic Redesign: Friday, May 13, 10am 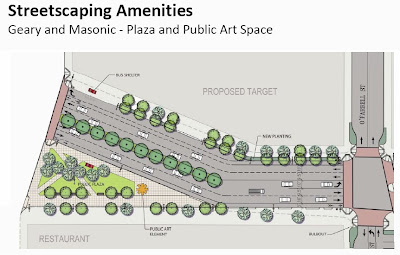 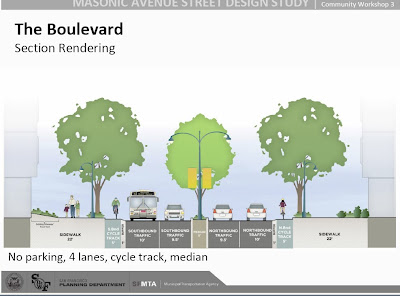 Masonic as a proposed Complete Street with safer use for all modes of transportation
The San Francisco Municipal Transportation Agency is ready to take plans for the redesign of the Masonic corridor to a public hearing before a hearings officer. Late this afternoon, SFMTA released the official announcement of the meeting that will be mailed to Masonic area residents and posted throughout the nearby neighborhoods. The flyer includes the traffic calming elements proposed for the blocks between Fell and Geary as well as the traffic configurations to be removed. The meeting is set for Friday, May 13, at 10 am in City Hall, Room 416 (Hearing Room 4).
The Masonic hearing will consider the proposed Boulevard design that includes measures to improve safety, livability, and improved transportation. The elements of the plan were developed with Masonic residents and community members in the summer and fall of 2010. Several surveys -- conducted by the SFMTA as well as neighborhood associations -- have reflected significant support for the full package of changes now proposed by city planners.
A new element to the proposal is the addition of 20 new parking spaces along the north side of Turk Street between Central and Baker streets. The new 45 degree, back-in, angled parking will help mitigate the removal of parking along Masonic. The wide transportation lanes of Turk can easily accommodate the angled parking, and there are no driveways along much of the proposed stretch.
As previously discussed, the Boulevard proposal includes several features to keep the vehicle traffic to the 25 MPH posted, add a safe separated bikeway for cyclists, improve pedestrian crossings, and enhance Muni bus stops. A full-length landscaped median with and a mini-park at Geary will encourage motorists to maintain legal speed and provide residents with a greener, more attractive environment.
The specific changes to be considered at the hearing, as noted in the official announcement:
RESCIND – TOW-AWAY NO STOPPING 7 TO 9 AM MONDAY THROUGH FRIDAY
Masonic Avenue, east side, between Fell Street and Geary Boulevard

RESCIND – TOW-AWAY NO STOPPING 4 TO 6 PM MONDAY THROUGH FRIDAY
Masonic Avenue, west side, between Geary Boulevard and Hayes Street

ESTABLISH – 45 DEGREE BACK-IN ANGLE PARKING
Turk Street, north side, between Baker Street and Central Avenue (adds approximately 20 more parking spaces)
Opinions on these proposed changes may be filed in writing prior to the hearing with the City Traffic Engineer at the Sustainable Streets Division, One South Van Ness Avenue, 7th Floor, San Francisco, CA 94103-5417. Written opinions may also be transmitted to the Sustainable Streets Division via fax at 415.701.4737. Submitted opinions will become part of the official public record and will be brought to the attention of the person(s) conducting the hearing. Information on the proposed changes may be obtained from the Sustainable Streets Division at the above-referenced address or by telephone at 415.701.4500.
Posted by Michael Helquist at 3:35 PM