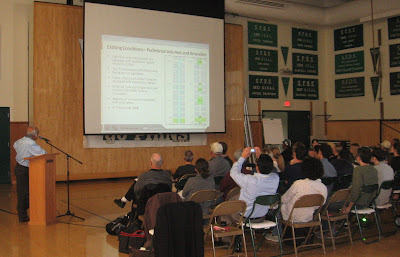 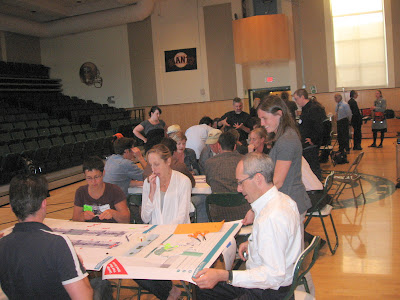 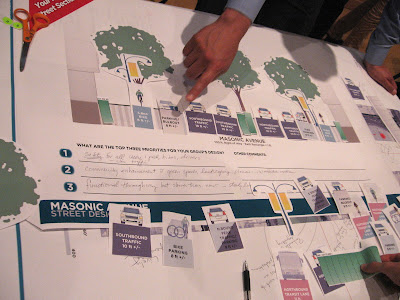 Masonic Monopoly? Group task to re-design a cross-section of the street 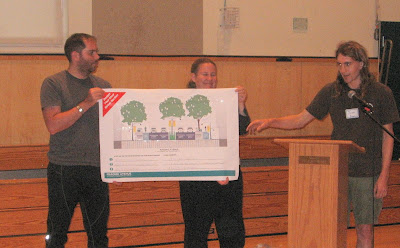 MTA will review 8 different sets of suggestions for street design
Masonic Avenue neighbors came away from the first city-sponsored review of the traffic corridor last night with an appreciation for how difficult it will be to re-design the street to better serve all users. More than 50 neighbors and a half-dozen city staff from the Municipal Transportation Agency (MTA), the Planning Department, and the Department of Public Works (DPW) reviewed the current status of the street and then broke out into groups to identify opportunities for changes. The participants' ambitious goals quickly ran into the realities of too little space even on a wide street with generally wide sidewalks.
Neighbors generally wanted to preserve features of Masonic, including
But they also wanted to re-design or at least enhance the corridor by
In the small group exercise, neighbors tried to fit all these features in a cross section of the street. Most were stymied with lack of space and considered trade-offs such as solid parking lanes or flex-time parking, a substantial median wide enough for trees or one just for small plants, and a narrower sidewalk to accommodate a bike lane.
Tuesday night the talk about Masonic mostly focused on people who use the corridor -- drivers, bicyclists, walkers -- and how to ensure safe passage for all of them. But one interest group also spoke up: people who live on the street. They share walking, biking and driving interests with those passing through, but Masonic is their home. Many at the meeting urged restoring a sense of community with a quieter street that encourages more interaction among those living on both sides of the street.
The intent of the meeting was to begin a process, according to Javad Mirabdal, the MTA planner who will guide the overall design review. "We're here to brainstorm tonight," he told the group. Miradbal anticipates three meetings; the next one will likely be held in August, probably the 17th. At that time city staff will return with design options based on modeling from Tuesday night's input. "We will present two or three options and discuss the costs and benefits for each."
Dr. David Jackson, Head of the San Francisco Day School, welcomed everyone to the facility at the start of the meeting. He emphasized how much the school community also wanted a safer Masonic. Recently SFDS urged the city to restrict left hand turns from Masonic onto Golden Gate as a result of a collision that occurred in front of the school and in view of students. The city agreed to implement the change. Jackson also offered use of the school for the second and third Masonic meetings.
Several members of the grassroots group FIX MASONIC joined the discussion last night. Marc Caswell, a Masonic resident, San Francisco Bicycle Coalition staffer and the current coordinator for the group, detailed the organization's previous efforts, including reducing the speed limit to 25 mph.
Previous post in the A Better Masonic series here.
Posted by Michael Helquist at 7:00 AM