UPDATE at 4:30 pm, March 16
MTA PLAN FOR FELL/ARCO TRAFFIC FLOW INCLUDES SAN FRANCISCO'S FIRST GREEN BIKE LANE
San Francisco will get its first green bike lane if a proposed design for dealing with the traffic tangle on Fell Street near the ARCO gas station is approved. As reported earlier today, the MTA hopes to increase safety for users of Fell Street leading to the Divisadero Street intersection.
James Shahamiri, Assistant Traffic Engineer for MTA, notified a working group of interested westside residents by email this afternoon of the agency's plan and provided a graphic of the proposal. In his message, Shahamiri wrote:
"The new proposal removes four parking spaces on the south side of Fell, just east of the gas station entrance. This space would be used for vehicles to queue to enter the gas station. Importantly these vehicles would be to the left of the bicycle lane. We are also proposing to color the bicycle lane green. This would be the City's first green bicycle lane. "
Shahamiri also noted that if community outreach and a subsequent public hearing for the removal of parking proceed without major setbacks, MTA staff "could take this to the MTA Board on May 4th for legislation and install shortly thereafter." 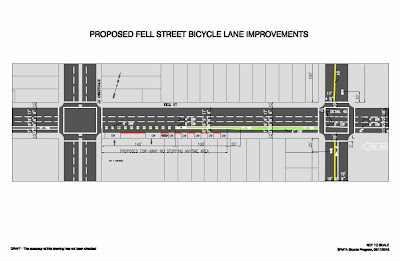 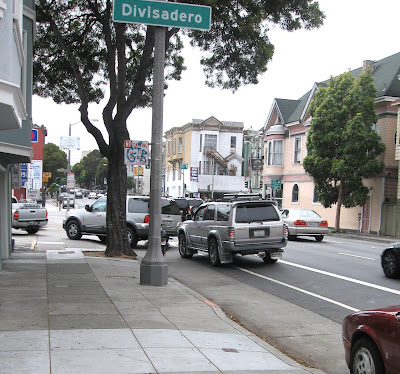 The Municipal Transportation Agency (MTA) has revised its traffic plan for the troubled stretch of Fell Street near the ARCO service station. "We have a design hashed out to take out parking on the south side of Fell Street," James Shahamiri, MTA Assistant Traffic Engineer, told BIKE NOPA. The new design would designate the former parking spaces as a curbside queue for motorists awaiting entry to the gas station. Shahamiri said the agency had not yet determined how many parking spots to remove. MTA has recently undertaken observational studies to determine what times of day and night the line-up begins, how many vehicles are in line, and where the access to the queue would be most appropriate. Shahamiri noted that the agency hopes "eventually" to use colored bicycle lanes to guide both cyclists and motorists.
Other elements of the MTA plan include a bicycle lane to the right of the queue, narrower lanes for all traffic, and a well-defined visual cue at the point that motorists cross the bike lane to enter the queue. Shaharimi described the traffic lane configuration left-to-right (travelling west on Fell) as the queue of vehicles, the bike lane, three lanes of traffic, and curbside parking on the north side.
The MTA decided to abandon its previous proposal, according to Shahamiri, that included soft-hit posts along the bicycle path as reported here. Shahamiri said he expected to share the design proposal with an informal working group of interested NOPA and Alamo Square residents by Wednesday morning. He is also scheduled to present the plan at the upcoming meeting of the North of the Panhandle Neighborhood Association (NOPNA) Thursday night.* In addition, Shahamiri emphasized that the MTA will conduct "targeted outreach" to residents of Fell between Scott and Divisadero.
BIKE NOPA asked Shahamiri if MTA intended to wait until the bicycle injunction is finally lifted, possibly in June of this year, before implementing the new traffic design for Fell Street. "We expect to do it sooner," he replied. Bicycle and pedestrian advocates have urged additional traffic design improvements on Fell Street for several years with heightened interest since last summer.
*NOPNA General Membership Meeting
Thursday, March 18th
Jannah Restaurant, 1775 Fulton Street, between Central and Masonic Avenues
7:00 pm, visit with neighbors
7:30 pm, meeting begins
9:00 pm , meeting ends
Posted by Michael Helquist at 7:00 AM