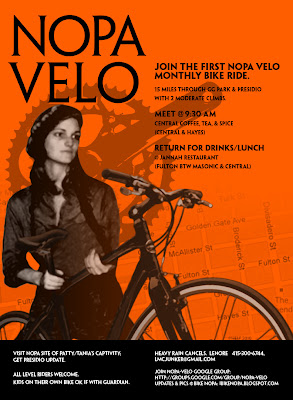 NOPA VELO, the North Panhandle’s new bicycling group for neighbors and friends, will launch its inaugural monthly outing on Sunday morning, January 31. Ride organizers announced that each ride will accommodate bikers of all levels with an emphasis on exercise and fine times with neighbors and friends. In addition, the outings will begin and end at NOPA's cool cafes and restaurants, making it one of the few neighborhood-focused, regular rides. 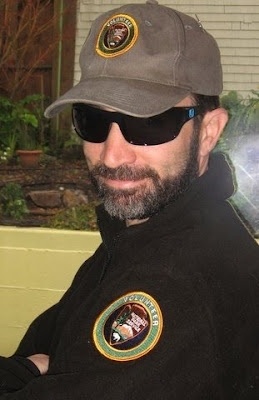 NOPA VELO organizers – Lenore McDonald, Rick Boardman, and Michael Helquist – were inspired by the enthusiastic turnout for the Bike, Meet, and Mingle events sponsored by NOPNA, the San Francisco Bicycle Coalition (SFBC), and BIKE NOPA last September and December. On both occasions, bicycle networking spun off toward NOPA-focused biking.

Lenore and Rick are veteran cyclists with experience organizing rides. Before finding her current home on Golden Gate, Lenore organized century rides in Marin. BIKE NOPA profiled Lenore in this previous post. Rick is originally from the UK but has been living, cycling and working in the Bay Area for five years. In London, he led the Hammersmith and Fulham group of the London Cycling Campaign for several years. He especially enjoyed leading sometimes muddy, but always fun rides along the Thames.

For ongoing info about the rides and more, join the NOPA VELO Google group here. News and photos will also appear regularly at BIKE NOPA.

Depart: 10:00 am for swing by Patty Hearst building and then into the Panhandle

2pm: Drinks and lunch at Jannah Restaurant, across from Lucky's on Fulton Street

All level riders are welcome and no rider will be left behind. Kids who can ride this distance on their own bike are welcome, if accompanied by a guardian.

The ride is approximately 15 miles with one medium climb to Sutro baths and another medium climb heading home on . Heavy rain cancels ride, otherwise we're on! Next ride: Feb. 27 or 28.

Posted by Michael Helquist at 10:00 AM